You may not have seen or even heard of a self-tacking jib before. They’re usually only found on luxury sailboats. But that’s exactly what one is, a headsail that sheets itself when you tack. You don’t have to cast off the working sheet and haul in the lazy sheet on every tack. In fact, after you set it up, you don’t have to touch the sheet again while sailing. You just push the helm to lee, come about as you normally would, and the jib passes through the fore triangle by itself and stops on the new lee side at the same sheeting angle as it was before the tack. I set one up for free and you can too.

But there are practical benefits to a self-tacking jib if you:

The basic principle of a self-tacking jib is simple; a means for the clew of the jib to remain sheeted throughout its arc of travel from one side of the sailboat to the other during tacks. Commercial self-tacking systems accomplish this with an arc-shaped track mounted to the foredeck. The jib clew is attached to the track by a single sheet to a car that glides freely on the track like a traveler. The sheet leads to the cockpit where the skipper can adjust the jib shape by trimming the sheet. Such systems can cost many hundreds of dollars to retrofit to a conventional yacht.

Instead of a track fixed to the deck, this system uses a block temporarily fixed to the jib clew. It reuses one of the headsail sheets you already have to form a bridle on the foredeck for the block to ride on. The other headsail sheet is not used.

The only other parts you need are two turning blocks. They can be snatch blocks that you keep on hand for miscellaneous jobs, your spinnaker sheet blocks if they’re portable, or they can be permanent blocks that you install just for this purpose (in that case, your system won’t be free). Heck, even two carabiners will work. If you only have one block or carabiner, reave the sheet directly through the clew grommet in step 2 below instead and attach your block or carabiner to the side deck where it can lead the sheet. The clew will have a little more friction but not enough to keep it from working.

When I want to set up the jib for self-tacking, I just move my existing spinnaker sheet blocks forward from the aft coamings to midship. I won’t be flying the spinnaker at the same time so they won’t be in use anyway. I like these 40mm web attachment style blocks from Nautos. They’re high quality, inexpensive, and work great. Instead of lashing them with webbing, I use 5/32″ dyneema loops or soft shackles. 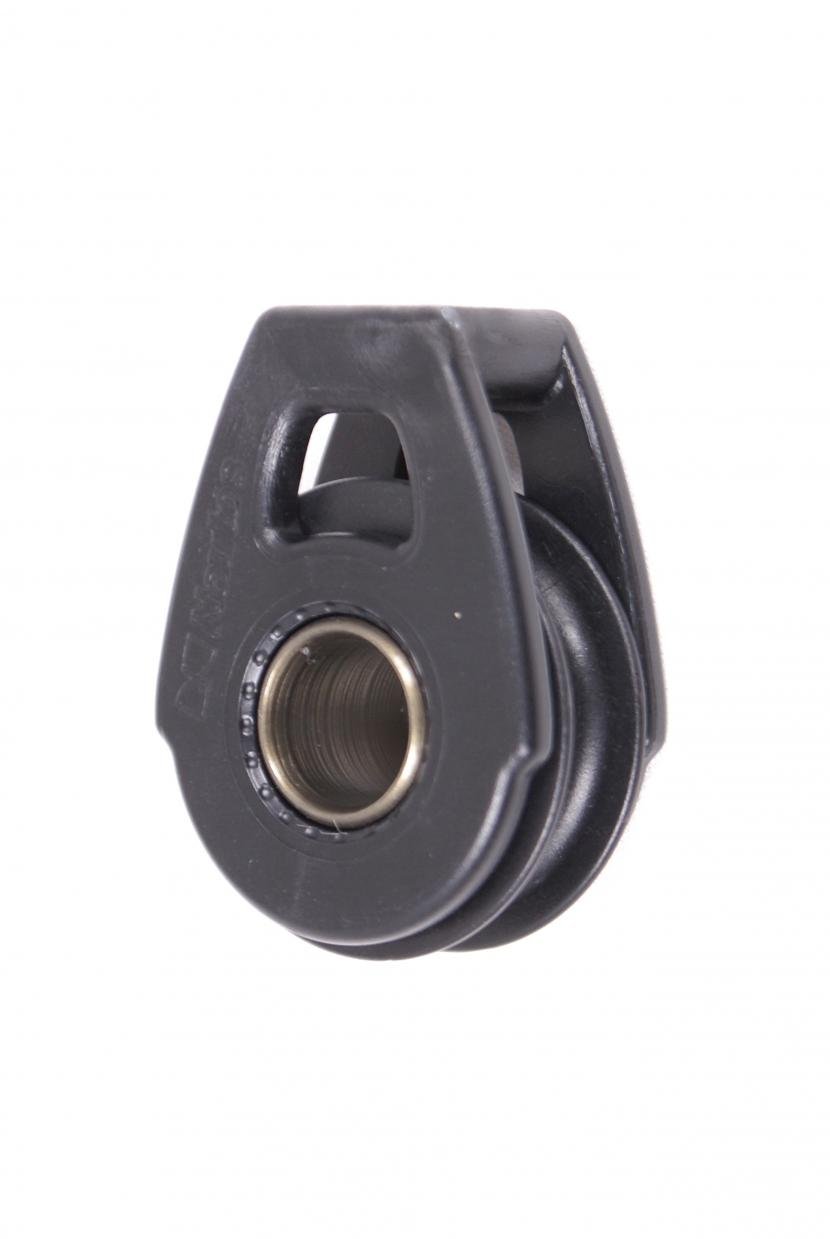 This self-tacking setup works best with a small headsail. I set up my 110% jib this way and it works okay. A larger headsail would not work. A 90% jib, storm sail, or trysail would work even better. That’s because, in order for the jib to set as flat as possible, the foot of the sail should be no longer than the distance from the sail’s tack to the jib sheet bridle.

1. Tie one end of the sheet to a point on the deck approximately abeam of the mast and as far outboard as possible. On a C-22, a forward stanchion base is a good place. If you have a toerail, you have lots of choices and can adjust the bridle position for the best sail shape. The picture below (taken from the foredeck looking aft) shows the middle of my single sheet tied to the starboard forward stanchion base. The lazy half of the sheet is leading aft. The working half of the sheet leads out of the picture frame to the right. I keep a soft shackle tied to an alpine butterfly knot in the middle of my headsail sheet where I attach the clews of my headsails. I describe this more in DIY Soft Shackles for Quick and Easy Headsail Changes . That soft shackle is tied to the stanchion base here.

2. Lead the working end of the sheet to the foredeck and reave it through one of the turning blocks that you have attached to the jib clew. The picture below shows one of my spinnaker sheet blocks tied to the jib clew with a simple girth hitch. The continuous loop makes it easy to tie and remove in seconds.

3. Continue leading the sheet across the foredeck to the opposite point on the toerail or stanchion base and reave the sheet through the second turning block (or carabiner) that you attach there. The picture below (taken from the foredeck looking aft) shows the block tied to the port forward stanchion base.