Storage solutions are some of the most sought after and popular projects among trailer sailors. Space is at a premium and if you load your sailboat with all the supplies, foodstuffs, and conveniences you want for a weekend of cruising, there isn’t much spare space left.

The problem comes when you want to use something that’s tightly packed away in one of the lockers. After you finally get it out, who wants to put it back in the same place? Oh no, it gets set aside on a shelf, on a seat, tossed in the V berth, you name it. After a day or so, you’ve got things scattered all around the cabin. Then, in order to get into any of the lockers, you have to move everything that’s sitting on them. To somewhere else. For which you have to move everything from there to somewhere else. You get the idea. You spend more time moving things than using them.

I’ve written about several other DIY storage solutions on this blog that I recommend:

Another that has worked well for me is a nifty double storage bag that I made from scrap materials left over from other canvas projects.

The idea came to me from watching the Volvo Ocean Race. The first mate used to complain that she didn’t like the gaping hole in the port aft bulkhead and the dark, empty space beyond it when we made up the cabin into one large bed for the night. Something about bogeymen in her closet when her parents sent her to bed as a kid.

Anyway, I suggested that I make a canvas flap to snap over the opening. She liked the idea and then I began to think of how I could make the flap more functional than just as a tiny curtain. I remembered seeing something in the galleys of the Volvo Ocean 65 yachts from the race.

My bag attaches to the snaps that are screwed into the port aft bulkhead behind the settee cushion. Normally, those snaps hold the cushion in place but since the bulkhead above the cushion is angled forward, it’s an uncomfortable place for an adult to sit. You can’t sit back without your neck bent forward. If you have kids, you probably make them sit there while you sit across the table from them where you can sit up straight. Neither the first mate or I sit there often or for long, so it’s a good place to repurpose the space for a little storage.

The bag is simply a canvas panel that is hemmed on all four sides. Two heavy duty mesh pouches are sewn into the front of the panel. Three snaps across the top hang it on the bulkhead, a couple extra snaps in the bottom corners hold it taught.

A canvas reinforced rim in the pouches helps to hold them open, ready to receive whatever you want to put in them: binoculars, handheld radios, sunscreen, hats, gloves, sail ties, bungee cords, the list could go on and on. The mesh makes it easy to see what’s in the pouches and it promotes drying if they contain wet items.

If you want to use the settee cushion instead, the bag snaps off and the cushion snaps on. The bag folds flat for storing elsewhere until you need it again.

You could make several of these and mount the snaps for them elsewhere in your sailboat: on the forward bulkheads, in the hull liner, in the V berth, on the backs of doors, on the bulkhead in the cockpit as line storage bags, almost anywhere. 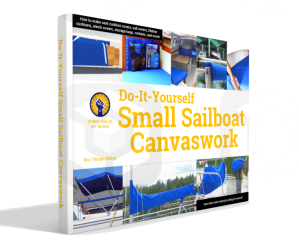 If you like this project, then you’ll really like my ebook Do-It-Yourself Small Sailboat Canvaswork. It contains this project and eight more canvaswork projects as well, all for only $20 USD. Click the picture at right to order your copy for immediate download and get started today!

Would you like to receive a dimensioned, scale drawing of this project with a materials list? Enter your email address below to follow this blog and receive notifications of new posts by email. You will also receive occasional newsletters with exclusive info and deals only for followers and the password to the Downloads page. It’s free and you can unsubscribe at any time but almost nobody does!